Aerospace manufacturing is a high-technology industry that produces "aircraft, guided missiles, space vehicles, aircraft engines, propulsion units, and related parts". Most of the industry is geared toward governmental work.

In the UK, the Aerospace sector is a successful, vibrant, high value, high technology engineering, manufacturing and service industry. It’s strengths are in areas such as the design and manufacture of large aircraft wings, aircraft engines, helicopters and advanced systems including landing gear, fuel, mechanical, avionics and electrical power.

The UK has the second largest aerospace industry in the world after the US, with over 3,000 companies employing approximatley 230,000 people. It’s expected to grow at a rate of 6.8% over the next few years. 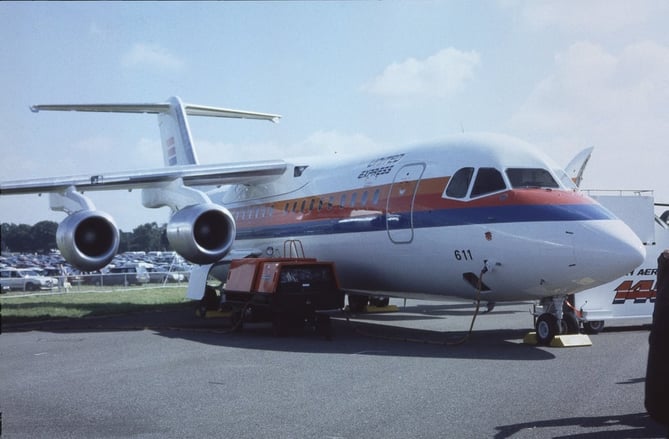 With a 17% Global market share, the UK Aerospace industry and ADS (Aerospace, Defence, Security and Space) Members are well positioned to benefit from the continued rapid growth in the international aerospace market. Environmental regulations and considerations are key drivers for the latest technology developments and the UK is particularly well-placed to exploit this trend, having strong capabilities in all relevant areas such as technology, manufacturing and regulatory frameworks.

The 3,000+ aerospace companies operating in the UK include BAE Systems, GKN and Rolls-Royce. Other international companies with operations in the UK are Airbus, Cobham, AgustaWestland, Finmeccanica, Thales, Boeing and Bombardier.

The UK aerospace sector has the largest number of small and medium sized enterprise (SME) companies in Europe, with 55% of total civil aerospace sales in 2010.

It was Britain's Frank Whittle that propelled aviation into the jet age. The UK is today one of the world’s biggest manufacturers of jet engines. The main player is Rolls-Royce, the world’s second-largest aero-engine manufacturer. Its engines power more than 30 types of commercial aircraft, and it has more than 30,000 engines currently in service across both the civil and defence sectors. Rolls Royce's family of Trent jet engines makes up around 75% of its order book, with variants of the Trent engine used on both the Airbus A380 and the Boeing Dreamliner.

The amount of engines produced by Rolls Royce creates opportunities for manufacturers of components operating throughout the UK. This also helps to continue demand for servicing and maintaining aircraft engines.

The aerospace sector spent £1.4 billion on R&D in 2012 which represents 12% of total R&D spend across the manufacturing industry.

UK companies are leading innovation in engine maintenance. At centres like Nottingham University’s Institute for Aerospace Technology, academic researchers are focusing on new power systems and improving the way faults are diagnosed. Companies are also funding the development and testing of new technologies.

The UK’s aerospace sector is supported by a widespread research base, with many universities contributing towards study of the fundamentals of flight and development of new technologies. Notable sites include the National Composites Centre at Bristol University, which has been heavily involved in developing composite wings for civil aircraft such as the Airbus A350; the Institute for Aerospace Technology at Nottingham University: the Whittle Centre at the University of Cambridge, which focuses on jet-engine technologies; and the Department for Aerospace Engineering at the University of Cranfield, which was BAE Systems’ partner in developing the flapless DEMON UAV.

The UK has a highly skilled workforce which helps UK based companies respond to changes within the industry. UK Students are able to study a number of different engineering related courses at universities throughout the country which provide the knowledge, skills and training for working in the aerospace industry. The top ten universities offering aeronautical and manufacturing engineering courses in 2016 are: Cambridge, Imperial College, Bristol, Bath, Southampton, Surrey, Glasgow, Nottingham, Loughborough and Sheffield. They all score highly on student satisfaction, research quality and graduate prospects.

Defence is a major part of the UK’s aerospace sector. In addition to BAE Systems, a number of other international companies work on defence projects in the UK.

BAE Systems makes large sections of the Typhoon Eurofighter at its sub-assembly plant in Salmesbury and assembles the aircraft for the RAF at its Warton Plant, near Preston. It is also a principal subcontractor on the F35 Joint Strike Fighter - the world’s largest single defence project - for which it designs and manufactures a range of components including the aft fuselage, vertical and horizontal tail and wing tips and fuel system. As well as this it manufactures the Hawk, the world’s most successful jet training aircraft – at its Warton plant.

Other major players include Airbus UK – which manufactures the wings for the A400m military transporter, Rolls Royce, whose engines power around a quarter of the word’s military fleet and Agusta Westland which designs and manufactures complete helicopters in the UK.

The UK Defence Sector is the largest exporter of defence equipment and services in Europe, second only to the US. Generating annual revenues of more than £22bn, the sector delivers world-leading capability that is vital to protecting UK/global security and generating economic prosperity.

The government’s joint aerospace industrial strategy aligned with business, was published in March 2013. The strategy specifies what needs to be done for the UK to remain a leader of manufacturing technologies that will help development of new aircraft and technologies.

The AGP is a partnership between government and industry to work together on addressing the challenges for the future of the aerospace sector.

The global economy increasingly depends upon Space infrastructure and hardware, such as satellites and advance infrastructure. The UK is the leading exporter of satellite-based tools to the developing world. The UK Space sector currently commands 7.3% of the world market in Space products and services. The sector is experiencing significant growth and the UK market is expected to grow from its current level to £40bn by 2030.

Much of the UK’s space industry is centred around EADS Astrium, based in Stevenage and Portsmouth. The company builds the buses - the underlying structure onto which the payload and propulsion systems are built - for most of the European Space Agency’s spacecraft, as well as commercial satellites. The world leader in compact satellite systems, Surrey Satellites (spun out of Surrey University), is also part of Astrium. In support are many smaller companies, producing components such as optics, computing hardware and propulsion.

Although the UK no longer builds complete passenger aircraft it retains the skills and capabilities to design and manufacture almost all of the key components from fuel systems and landing gear, to wings, fuselages, flight control surfaces, nacelles and jet engines. UK engineering is at the heart of the sector’s most ambitious projects and the UK exports 75% of what it produces, and generates almost £12bn in revenues.

Other key names include GKN Aerospace - an expert in metallic and composite aerostructures that’s involved in almost every civil and military fixed and rotary wing aircraft in production and development today, and Bombardier – the world’s third largest airline manufacturer, which built the wings for its new C-Series aircraft at its Northern Ireland manufacturing facility.

The composite wings for the Airbus A350 are built at Broughton in North Wales. Prospects for the future look good. According to the Global Aerospace Outlook 2013, a recent report commissioned by industry trade body ADS Group, expected demand over the next 15 years for 27,000 new large civil airliners and 40,000 rotor aircraft could translate into UK orders worth £474bn.

Small specialist companies working in the supply chain are also important for the aerospace industry. Many supply components and parts to companies in the UK and also overseas through exports.

Developing the supply chain is a matter of concern for the government, with a £90m initiative from the Department of Business, Innovation and Skills; £50m to fund collaborative R&D projects to develop innovative technologies and £40m to address skills shortages.

In the defence aerospace supply chain, the world’s leading manufacturer of ejector seats is based in the UK. Martin-Baker developed the first ejector seats in the mid-1940s and now produces ejector seats for fixed-wing aircraft and crashworthy seating for helicopters from its headquarters near Uxbridge.

Somewhat controversial but unmanned aircraft systems (UAS) - ‘drones’ to the public - are a crucial sector for the aerospace industry. The main player in UAS in the UK is, unsurprisingly, BAE Systems, which produces the MANTIS twin-engined UAV and has development programmes for the TARANIS stealthy unmanned combat aircraft, which is projected to enter flight trials this year, and the DEMON flapless aircraft, which controls its trajectory with jets of air blown over the edges of its wings. But the project which best illustrates the reach of UAS in the UK aerospace sector is ASTRAEA (autonomous systems technology related airborne evaluation and assessment), which is developing all the systems necessary to fly a UAV in occupied civil airspace, including the ability to sense and avoid other aircraft and to navigate around dangerous weather systems.

The buoyant UK industry is internationally recognised as being one of the best in the world - it has defied the worst economic downturn in living memory and continues to grow. It's an industry that designs and manufactures the most advanced pieces of some of the world’s most-talked-about feats of engineering and it has a bright present and an exciting plan for the future.

The challenge for the industry now is to continue to play to its strengths, to innovate and to invest in the skills that will help the sector remain competitive. The establishment of the aerospace growth partnership - a joint collaboration between industry and government - is a welcome move towards a coherent vision for the years ahead.