Britain has voted to leave the European Union. It was an unexpected result and not one that was particularly welcome to most businesses in the UK. However, the country is beginning to come to terms with the result of the referendum and the effects that Brexit may have on all our lives. 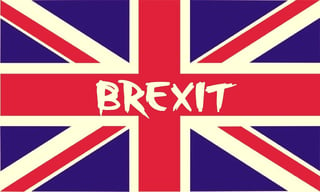 We are still in the very earliest stages of renegotiating trade deals – and of course we have not yet triggered Article 50. Consequently we are still not in a great position to evaluate the effect on prices generally – and what is true today will not be true this time next year – or, the way things are going at the moment, probably even next week!

What we can say with some degree of certainty is that Brexit has already affected house prices, that favourite British conversational chestnut. The UK’s house price boom is set to come to an abrupt end after the vote, according to estate agents and analysts. One expert expects price falls of 3-5% over the next year and the full extent of what has happened to house prices since the referendum will be known when new figures are released at the end of July. These results will have a knock-on effect on businesses connected with the building trade and housing market.

In the meantime it will be up to the Bank of England to intervene in the foreign exchange markets – by buying pounds – to try to stabilise its value.

The first practical effect of a vote to Leave, therefore, is that the pound is worth less abroad, meaning the price of foreign holidays will be more.

A lower pound means that imports become more expensive, which is likely to mean the return of inflation, a phenomenon with which many of us are unfamiliar because prices have been stable for so long.

Price rises may not be particularly noticeable in the first few months - confined initially to imported goods – food and clothes mostly – but inflation has a tendency to spread and price rises may be seen on other imported goods before too long. The pound has weakened against the dollar - the currency that most food commodities are priced in – and as a result of that food prices may rise.

Some economists however welcome a small dose of inflation because it stimulates economic activity and prevents a slowdown in the economy turning into something more serious.

The Bank of England has a legal obligation to keep interest rates as close to 2% a year as possible. If a fall in the pound threatens to push prices up faster than this, the Bank will raise interest rates.

This makes the pound more attractive, because deposits in pounds will earn higher interest and it reduces demand by putting up the cost of borrowing, especially by taking larger mortgage payments out of the economy. It does make it more expensive for businesses to borrow to expand output.

Mark Carney, the Governor of the Bank of England, and his Monetary Policy Committee may face a dilemma in a few months’ time. If inflation rises and they sniff a recession is on the way, interest rates will rise. The good news is they will not go up by much. The Bank of England resisted lowering interest rates earlier this month.

What will happen to the price of a weekly shop post-Brexit?

We are still waiting for the consequences of the Brexit decision to hit consumers. Treasury analysis pre-Brexit forecast that the average family’s weekly food and drink bill would rise by almost 3%, or £120 a year, in the event of Brexit – and many food and drink industry experts believe that leaving the EU will lead to a rise in food prices as 40 % of the food we consume is now from overseas.

However, Professor Alan Matthews, from Trinity College Dublin, has argued that Brexit would have a “negligible” impact on food prices overall. In a presentation earlier this year, he said extra trade costs with the EU would be offset by the removal of the EU’s tariffs on certain foods sourced elsewhere.

Brexit effect on the price of chocolate

Cocoa prices for UK buyers have surged to their highest level since 1977. The price of cocoa in London rose by 1.5 % to a record £2,495 a tonne in the week following the referendum. The increase has however not yet reached the consumer.

Brexit effect on the price of petrol

Petrol prices are coming down for the first time in six months, ending fears Brexit would lead to hikes. Last week Morrisons cut up to 2p off a litre, taking unleaded and diesel to under £1.10 a litre in its 333 filling stations. Tesco, Asda and Sainsbury’s are almost certain to follow suit and BP, Shell and Esso are sure to react to this price decrease.

The RAC has said that despite the post-referendum fall in the value of the pound, wholesale petrol prices have largely been unaffected due to a simultaneous 6% drop in the price of oil.

“Wholesale prices have remained relatively stable after an initial small upward jolt as a result of the pound falling on news of the referendum result,” Simon William, RAC fuel spokesman, said.

Manufacturing output could be affected by a lesser level of access to the European market, Britain’s most vital trading partner, although some form of free trade partnership (FTP) is likely to be negotiated. International payments and currency risk are sure to increase however. Many smaller manufacturing companies do not always realize they have options to mitigate their currency risks and protect their trading profits by planning their future currency income and expenses. Often a simple forward product can suffice but there are also plenty of more complex strategies that can be put into place with the help of specialist currency providers.

The food and beverage sector is the largest UK manufacturing sector, so it was noteworthy that Nestlé indicated that it would move its sizeable UK presence if Britain decided to leave the EU, as would Airbus UK, operator of the UK’s single largest manufacturing facility by workforce size, and Nissan, whose Sunderland factory is reportedly the most efficient in Europe. It is clear that currency risk and the cost of doing business outside the Eurozone is substantially outweighed by the interests of remaining within a common market, for most companies. The effect on prices for the manufacturing sector remains to be seen in the coming months.

Experts say it is important to remember there is still no certainty about how things will look once the UK reaches a deal with the EU – and the effect this will have on prices. The dust will not settle for at least two years on the UK economy post-Brexit but in the meantime the effect on prices to the average consumer is likely to be negligible.

Helen Dickison, British Retail Consortium (BRC) chief executive has stated that that the time it takes for prices to increase again will depend on a number of factors, including the future value of the pound, commodity prices and any eventual impact of the Brexit vote on input costs. There has been no major effect on prices since the vote to leave and experts believe that this situation will remain for the forseeable future.