Why Women Pay More than Men For Products

We know the expression that men are from Mars, women from Venus – well it seems that where women and shopping are concerned, the prices are more expensive whatever planet they are shopping on!!

Whether women are spending their money on pens, razors, designer fragrance, beauty products, dry cleaning or plain old Marks & Spencer vests, they pay a surcharge just for being a woman. In theory, men and women enter a shop as equals - but, in practice, products marketed specifically at women routinely cost more than similar or identical products marketed at men.

As well as this pricing disparity, there is still a gender pay gap (it's 19.1% across all workers in the UK) so that whenever they get to a till, women are effectively paying three times - once in their salaries, once in their spending, and once in a surcharge on any women-directed products in their shopping baskets.

So why, in 2016, are prices still discriminatory to women – and why are women prepared to pay more (without batting an eyelid) than their male counterparts?

Way back in 1995, California passed a law to ban gender-based price discrimination, citing analysis that women were spending an extra $1,350 a year because of the bias. This only applied to service pricing - car washes, dry cleaning, etc. - not products in stores. Women still pay more than men for almost identical items across the high street from childhood into old age. Recent research by The Times found price disparities across hundreds of gender-targeted items, including toys, clothes and beauty products, with those marketed specifically at women on average 37% more expensive. 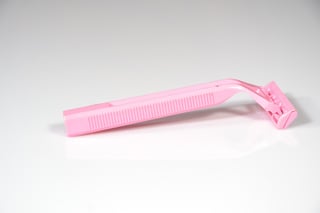 The Times found “female” razors and “for her pens” among the products that appeared to have a premium just for being pink. Bic's 'for her' pens cost a third more than the same product in blue or black at Staples. A pack of 10 twin-bladed men’s razors by Bic is on offer at £1 at Tesco while Bic’s pack of 8 twin-bladed 'lady' razors is on offer at £2. A spokesperson for Tesco said: “We work hard to offer clear, fair and transparent pricing. A number of products for females have additional design and performance features. We continually review our pricing strategy.”

It is however a proven fact that in personal care products such as shampoo, conditioner, shower gel and bath products, those targeting women tend to carry higher prices. Some women are unaware of the price differences, some just want an item that they consider 'prettier' than the male alternative – and are prepared to pay the difference. Some women perceive greater value in the pricier items – rightly or wrongly.

In France, a petition aimed at getting Monoprix, a major retail brand, to change its pricing has gained almost 40,000 signatures. The petition notes that a packet of 10 male razors costs less than a packet of 5 female razors, even though the products are basically the same. Monoprix denies price discrimination, saying that the different pricing comes from the fact that men buy more razors than women do.

Women are perceived to have more 'fanciful' tastes and these design 'discrepancies' make any surcharge legal, as does the fact that these products are available to men to buy, too (unlike cheap women’s car insurance, which was ruled prejudicial to men).

If a woman logs onto the Nike website to buy football boots she will face a selection currently starting at £125 while her male counterpart can buy a pair for as little as £29.99! A plain 100% cotton women’s vest costs £6 at M&S while men get three pure cotton equivalents for £12.50. The Kurve balance bike by Kiddimoto (decorated with skulls) looks a bargain at £49.99, compared with the flowery Kurve model aimed at girls (£59.99, both at halfords.com). It seems that most parents (of both sexes) have no objection to paying more for their daughter's prettified toys (that cost no more to produce) – even though they do exactly the same job as th boy's model.

Comparing nearly 800 products with clear male and female versions from more than 90 brands sold in store and online, NYC's Department of Consumer Affairs (DCA), which carried out a study into gender pricing in December 2015, found that the women's version of products cost more than men's.

They found that, on average and across five industries, women's products cost 7% more than similar products for men. Specifically:

Giving some case studies, such as children's cycle helmets, scooters, shampoo and razors, the DCA showed how similar, or even almost identical products, can cost different amounts for men and women. Over the course of a woman's life, the financial impact of these gender-based pricing disparities "is significant," the DCA said in its report.

Some experts say that such pricing discrepancies are here to stay: “I don’t see this going away anytime soon, because the dialogue in our culture is that men and women are different - we call each other the ‘opposite sex,’” says Nicholas Guittar, an assistant professor of sociology at the University of South Carolina who has studied gendered pricing; thus, he says, pricing differences don’t bother Americans enough for people to rebel against them. “Gendered pricing disparities will persist despite the presence of increased gender equality in society.”

Prof Nancy Puccinelli, a consumer psychologist at Oxford University says that her research suggests that women are actually much more careful shoppers than men, better able to scrutinise adverts and pricing gimmicks. She wonders if women are perceiving more value in the more expensive products – and at the moment they are not protesting in sufficient numbers about price discrepancies. Women, even if we perceive that we must be getting better value by purchasing these pricier, women-directed items, it surely is time to make more cautious choices about where and how to spend our hard-earned money.

How can we better tackle gender imbalance in software development

8 Must Read Books for Pricing Professionals

14 Ways to Keep Customers Coming Back