What is Surge Pricing - and is it appropriate for my business?

What is Surge Pricing?

"Surge pricing" occurs when a company raises the price of its product or service if there is an increase in demand - and lowers prices when demand is weak. This article looks at two case studies with a view to show what business models a surge pricing strategy is best adopted in.

A look at UBER

For instance, Uber (a taxi site that connects drivers with people needing a ride) raised some eyebrows when they announced that they would be implementing "surge pricing" on New Year's Eve. Uber said that this strategy would help to increase supply as it would encourage more drivers to work. Without surge pricing, Uber maintained that supply would eventually run out and people would be unable to get to their destinations. They declared that when demand started to ebb, their prices would fall automatically. The surge price would also apply during other periods of high demand e.g. bad weather, public transport strikes etc. Uber does notify the customer when surge pricing is in effect and the fare estimator provides an accurate estimate of the fare before the customer confirms the request.

"Our goal is to be as reliable as possible in connecting you with a driver whenever you need one. At times of high demand, the number of drivers we can connect you with becomes limited. As a result, prices increase to encourage more drivers to become available.

We take notifying you of the current pricing seriously. To that end, you’ll see a notification screen in your app whenever there is surge pricing. You’ll have to accept those higher rates before we connect you to a driver."

"Uber is ALWAYS a reliable ride. Being unavailable, inconvenient is the opposite of Uber.

This is a big part of why we do surge pricing. What good is it if we are as unavailable as a taxi system or an unreliable muni system on New Year's Eve? Being Uber means being “Always On” and “Always Convenient”.

The average surge pricing multiple on New Year's Eve 2013 in New York was about 2x normal prices. Some customers claimed it was more like 6x.

Critics of this pricing surge reckon that it will alienate customers, denting Uber’s business. Microeconomics suggests that although Uber’s model does have a flaw, its dynamic pricing should be welcomed. 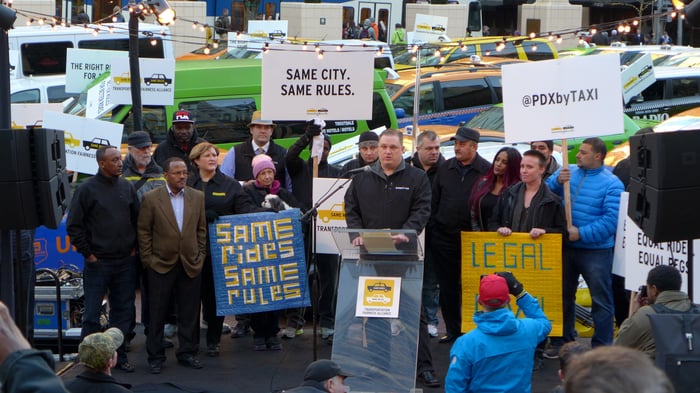 Taxi markets have long needed a shake-up. In theory, entry should be easy - all that is needed is a car and a driving licence - with new drivers keeping cab fares close to costs. Yet in many cities, cabs are far from the competitive ideal and decades of regulation conspire to keep entrants out.

The convenience of hailing a cab from the comfort of a sofa or bar stool has given Uber a loyal fan-base, but it comes at a cost. Most of Uber’s prices are slightly cheaper than a street-hailed cab, but when demand spikes, the surge prices kick in.

Price discrimination in any form can alienate customers. It seems unfair when the charges for drugs vary across countries, the price of a train ticket varies with the buyer’s age, or, as in Uber’s case, the price varies depending on the time that the journey is booked.

However, a 2006 paper by Mark Armstrong of Oxford University explained that Price discrimination is not necessarily a bad thing. A firm offering a single price to all customers faces a trade-off: lowering prices raises sales but means offering a cut to customers prepared to pay more. Customers who value the good at more than it costs to produce might miss out in a one-price-fits-all system - as many punters who have tried to find a regular cab on New Year’s Eve will know.

Uber’s price surge aims to solve this. Like many technology companies Uber is a middleman. It links independent cab drivers with customers wanting a ride in the same way that Google links searchers and advertisers or eBay links sellers and bidders. The business model only works when successful matches are made. Because price surges raise the pay of Uber's drivers (they get 80% of any fare, if they drive their own car) more cars are tempted onto the roads at times of high demand. Prices are high at 2am at the weekend not just because punters are willing to pay more, but also because drivers don’t want to work then.

This strategy is common for firms that operate platforms or “two-sided” markets which link buyers and sellers, according to a 2006 paper by Jean-Charles Rochet and Jean Tirole of Toulouse University. Firms often tilt the market to give one side a particularly sweet deal: nightclubs let women in free to justify charging men a hefty fee, telephone directories are given away to create a readership which advertisers pay to access. The theory predicts each side’s deal depends on two things: price sensitivity and how well-stocked each side of the market is. Uber’s price surge fits perfectly: Friday-night revellers are hit by a double whammy since they are willing to pay up precisely when the pool of cabs is low.

There is some evidence to suggest that Uber’s surge pricing is improving taxi markets. The firm says drivers are sensitive to price, so that the temptation to earn more is getting more of their drivers on to the roads at antisocial hours. This suggests surge pricing has encouraged the number of taxis to vary with demand, with the market getting bigger during peak hours – which is good news for customers.

However, the inflexibility of Uber’s matchmaking fee, a fixed 20% of the fare, means that it may fail to optimise the matching of demand and supply. In quiet times, when fares are low, it may work well. Suppose it links lots of potential passengers willing to pay $20 for a journey with drivers happy to travel for $15. A 20% ($4) fee leaves both sides content. Now imagine a Friday night, with punters willing to pay $100 for a ride, and drivers happy to take $90: there should be scope for a deal, but Uber’s $20 fee means such journeys won’t happen.

Despite the revenues a matchmaking fee generates, it may not be Uber’s best strategy. A fixed membership charge is often a firms’ best option in two-sided markets. By charging drivers a flat monthly fee Uber would generate revenue without creating a price wedge that gets in the way of matches. Since stumping up cash might put infrequent drivers off, they could be offered a cheaper category of membership. Uber should keep its surge pricing in place but to make the market as big as possible, and really revolutionise taxi travel, it might need to retune its fees.

Uber has brought technological savvy and a slick user experience to the taxi market in many countries, and acquired a dedicated following. Uber has real-time data on demand, nudges supply to meet it and makes it vastly easier for drivers and riders to connect.

But some are having trouble swallowing that rationale. An app called "Cut the Surge", claims to be able to predict Uber’s rate for the upcoming hour. If a warning of a surge comes up on the Uber app, "Cut the Surge" will tell you when you can expect rates to return to normal.

A look at OPENTABLE

Another company, OpenTable, claims that surge pricing (also sometimes called 'premium pricing') may be the answer for diners looking for a table at popular dining venues where it is next to impossible to get a reservation. The table management company recently began testing its Premium Reservations service. According to the site, OpenTable diners have told the company that they are “willing to pay for last-minute, prime-time reservations at popular restaurants.”

In a blog post aimed at restaurants, Vannie Shu, who leads global product marketing for consumer platforms, content, & discovery at OpenTable, writes, "with costs continuing to rise, many restaurants are looking for creative and simple ways to grow revenue, while continuing to deliver great hospitality. We know all restaurants face challenges - even the most popular ones.”

OpenTable is mostly aiming the premium feature for Fridays and Saturdays. It’s similar to other booking options from Reserve, which charges a basic $5 “concierge fee” for tables; if a table is not readily available, Reserve allows users a separate “bid” option for access to high-demand tables at a particular date and time.

In OpenTable’s post, it positions the premium option for restaurants as a way of generating additional revenue and as part of the company’s larger promise of helping make the entire dining experience more fulfilling for patrons and restaurants. The company, which was acquired last year for $2.6 billion by Priceline, notes that 100 % of the proceeds go to the participating restaurant.

Vannie Shu believes OpenTable can capture more value for peak-time tables. “Giving guests without the ability to plan ahead (last-minute business travellers, unexpected celebrations, etc.), the opportunity to be seated will delight those in need of your hospitality. Plus, reaching OpenTable’s most frequent diners, our app users, doesn’t hurt either. The experience for restaurants should be seamless as we integrate this into our leading table management system.”

Surge pricing only really works when the demand for a service is immediate. For some, “surge pricing,” the use of algorithms to automate price increases on products and services in periods of high demand and limited supply, adheres to a basic principle of the free market economy. Others see it as a form of price gouging, a pejorative term referring to when a seller spikes the prices of goods, services or commodities to a level much higher than is considered reasonable or fair, and is considered exploitative, potentially unethical. Usually this event occurs after a demand or supply shock after a natural disaster. Regardless of your point of view, the use of surge pricing appears likely to increase as a growing number of companies in the on-demand economy test its application.